The first squadron of unmanned aerial vehicles (UAVs) was formally inducted in Pakistan Navy’s fleet during a ceremony held at the navy’s airbase, Mehran, on Wednesday.

Chief of the Naval Staff Admiral Noman Bashir graced the occasion as chief guest. The indigenously developed UAVs are equipped with state-of-the-art equipment and sensors and can successfully be employed in support of Maritime Interdiction Operation (MIO) in the coastal areas. The induction of UAVs in Pakistan Navy will enhance its operational capabilities.

Admiral Noman, while addressing the audience, congratulated all those who were involved in the UQAB-II programme and expressed satisfaction on induction of UAVs. He said that prevailing maritime environment poses multifarious challenges to navies across the globe. In addition to traditional roles, navies are now increasingly confronted with emerging challenge of deterring maritime terrorism. Owing to their small size, ease of operation and maintenance versatility in employment and low risk of loss, UAVs are regarded as force multipliers and are increasingly being used by combat forces worldwide.

Admiral Noman reiterated that UAVs induction is a manifestation of PN’s commitment and resolve towards self-reliance and indigenisation. Cognisant of the heightened surveillance measures at all times, the induction of UQAB-II UAVs will provide essential experience to Pakistan Navy and necessary impetus to utilise this particular segment of warfare to the best use of naval objectives.

Mass murder on the cheap

In many ways, it's the perfect weapon for a war-weary nation that suddenly finds itself on a tight budget.

Missile-armed drones are playing a greater role than ever in U.S. counter-terror operations, as President Barack Obama winds down land wars in Iraq and Afghanistan, and Washington's focus expands to militant havens such as Somalia and Yemen where there are no U.S. troops permanently on the ground.

For complete information go to: http://www.kateripeaceconference.org/
or call John Amidon at 518-312-6442

Kindly pass along to your friends and neighbors. Thank you!

From LVRJ: Activists appreciate nation where everyone has a say

Well done and thank you Jim and Linda, for your Work...

Jim Haber's and Linda Faso's names might seem vaguely familiar to you, even though it's unlikely you've ever met them in person.

Maybe you've run across their names in a photo caption or a newspaper story. Maybe you've driven by as they were holding picket signs or marching in demonstrations. And when you saw them, maybe you honked your horn in support, or yelled "Get a job!" or offered them a rude single-digit salute.

Haber and Faso are political activists, he for anti-war and pro-peace causes and she for animal rights. Singly and together, they're the living embodiment of dissent, the bedrock American value that not only allows us to disagree -- with each other, with our government, with mainstream society's opinions -- but encourages us to do so.

Independence Day weekend seems a good time to remember that our nation was founded in dissent, and that, even today, we remain happily, usefully and sometimes uncomfortably awash in it.

And it's interesting to note how often in our history dissenting voices -- over slavery, civil rights and women's suffrage, to name a few issues -- have evolved into mainstream thought, all because a handful of Americans got involved, spoke up and raised some democratic hell.

Faso and Haber certainly find it interesting. They're even banking on it happening again.

This summer and autumn get ready for Peace Actions across the Globe!

From the Agenda of The Nuclear Resister:

July 26 will be the day for nonviolent direct action at NEAT, the North European Aerospace Test Range, during NATO war practice. Make a direct impact on the largest training ground for war in Europe and meet as organizations and activists to exchange experiences and knowledge and coordinate resistance in the future.

STRATCOM
The Des Moines and Omaha Catholic Workers will sponsor their annual 3-1/2 day August 6-9 “shake and bake” vigil at the gates of Offutt Air Force Base, in Bellevue, Nebraska, home of the Strategic Nuclear (STRATCOM) and the U.S. Military Space Commands.

Vigil concludes August 9 from 8–11 a.m. with a ceremony and line crossing. Evening programs to be announced; come for an hour or the whole time.

Bring a bedroll for church floor space or call ahead for other hospitality. For more info contact Jerry Ebner at 402-502-5887 or email cwomaha@gmail.com.

Call the Brandywine Peace Community, 610-544-1818, by July 25 if interested in participating in the Hiroshima Day civil disobedience. Check www.brandywinepeace.com for more info.

LIVERMORE LABS
Planning is underway for a Hiroshima Day commemoration at the Livermore nuclear weapons lab in California, with civil resistance planned for Nagasaki Day, August 9. For more info as plans develop, contact Tri-Valley CAREs at 925-443-7148 or visit trivalleycares.org.

Join this summer’s blockade of Europe’s largest, most expensive, new nuclear power plant at Olkiluoto, Finland. Plan to be there by August 20. Full details about the encampment, nonviolent direct actions, accommodation, legal consequences, maps and other information will be found at olkiluotoblockade2011.wordpress.com/english.

WALK FOR A NUCLEAR FREE FUTURE IN AUSTRALIA, CANADA, U.S. AND JAPAN

The Walk for a Nuclear Free Future is actually a series of walks through Australia, Canada, the United States and Japan over a five year period. The walks will follow the deadly nuclear fuel path from uranium mines to nuclear reactors, waste dumps and nuclear weapons sites. The drug- and alcohol-free walks will range from two to six months, covering an average of 15 miles/day.

A support van with kitchen will accompany each walk. Walkers will educate themselves and the public about a nuclear free future using street theater, music, art, public forums, media, petitioning, letter writing and nonviolent direct actions.

This year, Walk Away from Uranium Mining in Southwest Australia, August 21 – October 30.

In 2012, Saskatchewan to Montreal, Canada.

Walk coordinator Footprints for Peace has for over a decade organized annual walks, runs and bike rides bringing thousands of people into the streets to create positive change through peaceful action.

This September, the world’s biggest arms fair returns to the conference center at London Docklands, England. Make no mistake; this is the big one – the nexus of 1,200 purveyors of capitalism, war and repression.

Join the Day of Action against DSEi on Tuesday, September 13, and other actions all week. In previous years there have been street parties, Critical Mass bike rides, die-ins, mock sales of “arms”, legs and even a tank; splashing fake blood across the entrances, engaging with arms dealers on the trains and platforms, invading the car park and rail entrance, blocking the roads, locking on to the trains, tripod and boat blockades to stop equipment from arriving at the arms fair and more. Find out where the arms dealers’ dinner is taking place on September 15 and spoil their party!

Hundreds of people are expected to non-violently blockade the access to Hinkley Point nuclear power station for one day.

While the blockade will be the key focus, there will be plenty of roles and activities for people who do not wish to risk arrest. Everyone who is anti-nuclear can come and join us on the day to express their opposition in many different ways. We will prepare ourselves for this blockade with non-violence training, and we will not be deterred by police trying to prevent our non-violent action.

The blockade will be inclusive, allowing people from all walks of life and with a wide range of experience in non-violent action – or no experience at all – to participate. We will organise a safe environment for everyone, built on trust for each other, but also on our determination to stop nuclear new-build.

In the days before the blockade, there will be local actions in Bridgwater. There will be a camp and local accommoda­tion for people over the weekend and non-violence training will be provided.

US still in charge at Shamsi airbase 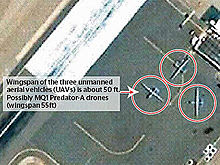 One week after Pakistan’s Defense Minister publicly demanded that the US leave its Shamsi air base in the Balochistan Province, the Obama Adminsitration is reporting that the base is “fully operational” and still in US hands.

The US immediately rejected the call to leave the base, insisting they will remain in control. Though the base is reportedly no longer used for drone attacks, it is used to launch surveillance drones, which help in the controversial drone attacks.

Which are continuing to this day. Indeed, just today a US drone attacked a house in North Waziristan, killing six people and wounding an unknown number of others. As usual, the slain were termed “suspects” but there was no indication of their identities.

US officials downplayed the risk of losing the Shamsi base, despite Pakistani demands, saying that the CIA already has a “backup plan” in place for launching the surveillance drones, presumably out of Afghanistan, if Shamsi is ever taken back by Pakistan.
(Antiwar Newswire)