On the development of "kamikaze drones".

Email ThisBlogThis!Share to TwitterShare to FacebookShare to Pinterest
Labels: Drones

See here for a short article on the "Drone Trial." 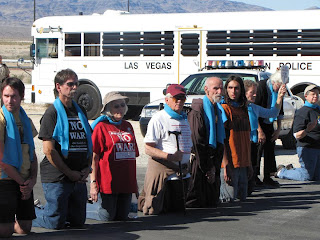 Code Pink Toby explains what is happening this weekend at Creech Airforce Base where hundreds of Catholic Workers and Code Pinkers are gathering to protest the use of Drone warfare and the research that makes possible robot weaponry. They will be present each morning up to October 13th, so join them!
Creech AFB, Indian Springs, Nevada, "home of the drones."

(Las Vegas) The largest anti-war demonstration ever at Creech Air Force Base in Indian Springs, Nevada, and the largest anti-nuclear civil resistance action in at least six years at the Nevada Test Site (now officially called the Nevada National Security Site or NNSS) will take place on Sunday, October 9. Over 200 radical pacifists from across the globe will swell the ranks of local activists because of the International Catholic Worker (CW)gathering in Las Vegas October 7 and 8. The CW gathering culminates with the antinuclear, anti-drone demonstrations which also mark the 10th tragic anniversary of the US
invasion of Afghanistan.

Creech Air Force Base is the headquarters of the USAF's 432nd Air Wing of Predator and Reaper drones which operates armed remotely piloted aircraft in various foreign countries.
The NNSS continues to support the country's nuclear weapons programs, has a mandate to restart full-scale nuclear bomb tests within two years if so ordered by the President,and receives and stores radioactive waste on land that legally belongs to the Western Shoshone Nation.

Jim Haber, Coordinator of Nevada Desert Experience which has a long history of peace activism in Nevada commented, “We are making connections to the Occupy Everywhere movement as well, but our prime focus is against war and killing as epitomized first by nuclear weapons and now drone assassins. Both rely on anti-democratic, secretive sites like these, the militarization of space, the desecration of ecosystems, and the swallowing of money that could otherwise be used to solve, rather than create social problems.”

“We are at an important milestone with 10 years of occupation in Afghanistan (and 8 in Iraq), expending millions of our tax dollars on unmanned aerial vehicles which are responsible for thousands of civilian deaths. The wars have bankrupted our country. It's time to stop the deadly drone strikes,” states Nancy Mancias, CODEPINK Ground the Drones campaigner.