Reblogged from Transform Now Plowshares, May 10, 2013

The Transform Now Plowshares sentencing has been set for September 23rd.  No decision has been made yet about whether the defendants must be held awaiting sentencing; lawyers have until Tuesday to submit more material for the judge to consider, and Michael, Megan, and Greg are being held until then.  After about an hour of combing through case law, conditions and sub-conditions this morning to determine whether or not the three should be held until sentencing, Judge Thapar asked the prosecution in frustration, “Don’t you find it a little troubling that Congress would write a law that wouldn’t let me distinguish between peace activists and terrorists?”

When Megan, Greg, and Michael arrived in the courtroom they were wearing tan prison jumpsuits marked “FEDERAL INMATE,” with their hands shackled to their waists.  We sang to them, “Sacred the Land, Sacred the Water.”  Francis Lloyd noted that Megan had begun to suffer from the cold, and got permission from the judge to lend her his jacket.

Much of the morning was spent exploring legal references, a purely academic effort to understand and apply the logic from previous cases.  “I mean, you may win under the B analysis, but I’m still on the A analysis,” the judge told the prosecution at one point.  Greg, who had been passing the time by toying with the shackles on his wrists, looked up with an amused smile on his face.  None of the defendants seemed particularly invested in the outcome of the morning.  At one point, Megan whispered loudly to Bill Quigley, “This is bothering my conscience.  I don’t want time wasted on this!”

There was an occasional break in the legalese when the judge would stop to reflect on the seriousness of crimes related to United States “national security” matters, and when the prosecution would remind the judge that the defendants showed “absolutely no remorse” for their action and were “of a VERY recidivist nature.”

Before the hearing was brought to a close, Bill Quigley asked to state for the record that “the defendants would like to point out that they were there to prevent a crime of violence far far greater than that of which they are accused.”

As Megan, Greg, and Michael were taken away from the courtroom, Kathy once more led the gallery in song: “We ain’t gonna study war no more!”

Outside, Paul Magno and Ellen Barfield briefly summarized the morning’s events for the press then introduced them to a range of eloquent speakers: Clare Grady to talk about the role of resistance in contributing to the evolution of law, and Father Bix, Chrissy Kirchhoefer, and Jim Haber to speak about the action in the context of ongoing nuclear resistance nationwide.

Below is the transcript of Clare Grady recapping for you all what she told the press:


So today what we heard was a lengthy, lengthy examination of the law, and yet the supreme laws of our land were left out of the courtroom, left out of this trial.  The Constitution, Article Six Section Two: “All treaties, pacts, and protocols that are signed and ratified become the supreme law of our land; every judge is to abide by them.”  And those laws have evolved over the years to outlaw war of aggression; outlaw weapons of mass destruction; outlaw killing civilians; outlaw occupation; outlaw stealing the earth’s resources to build these weapons.  We are not upholding those laws.


Our friends in this courtroom have manifest the original law that is written on our hearts, the law to love one another.  We all bring each other forward, help each other when we each manifest that law; then our human laws will start to reflect that as well.


This is not just about Greg and Megan and Michael.  It’s a collective that has offered us this by example, and then we offer each other this by example.  This is a tag team, a relay race — whatever you want to call it, but it’s something that’s done in a collective, it’s not done alone. 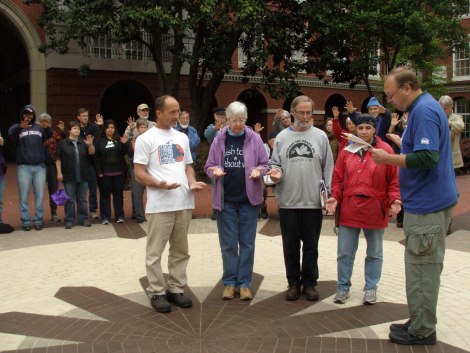